Why is Flight Simulator so much fun? 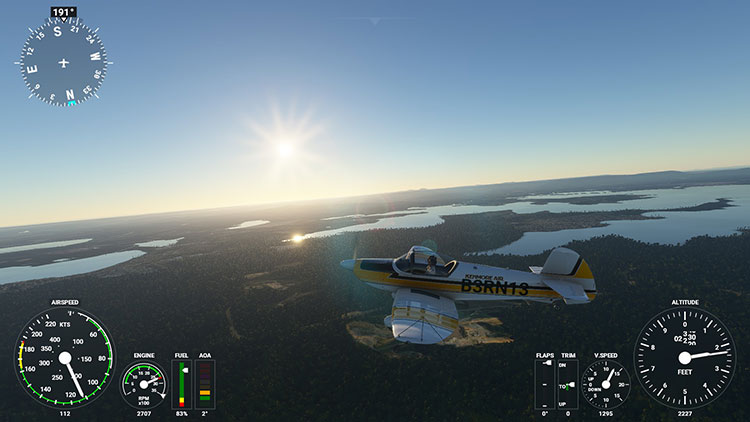 I am sure plenty has been written about how a decent chunk of Microsoft Flight Simulator’s popularity has to do with the COVID-19 pandemic and associated lack of travel. This is just the first example that drifted to the top of a Google search about it.

It was certainly part of the reason I initially parted with what I feel was probably a bit too much money (buying a copy through Steam set me back the better part of $100, which, ouch) late last year a short while after the game launched.

The theory holds up. Not that we were planning a significant amount of international travel – none, really – in 2020 or really in 2021. But still, having being told that exploring the world is going to be prohibited for the medium term is enough to get the feet itchy. The classic childhood response, “I wasn’t interested in doing that, but now you have said I can’t it is all I want to do.”

I did try to resist. I really did. Especially once reports emerged of how CPU bound the game is. My computer is not what you would call modern.

It was built just prior to Christmas 2014. Suffice to say, Flight Simulator was not build with six-year old tech in mind. It got it running, however. It wasn’t pretty, and flying around places like London or New York sends the frame rate into the single digits, but it runs.

And even not being able to crank everything up to ultra settings, basking in 4K photorealism, there is something about Flight Simulator that gives it an almost mediative quality.

There is something incredibly serene about casually flying down the coast from my home town of Newcastle towards Sydney. Seeing places you know like the back of your hand from ground level given a new perspective.

The world in Microsoft Flight Simulator is a full-scale recreation of planet Earth based on the company’s Bing Maps OpenStreetMap and a company that specialises in an actually useful application of AI and machine learning.

The result is nothing short of amazing. By and large, areas you are familiar with feel right. It’s not uncanny valley, but a step back from that where you can rationalise that you are playing a video game, but also lose yourself in exploring familiar places from a new perspective.

Of course, it is not perfect. The Essendon Monolith, for example, was an early glitch discovered in Flight Simulator’s rendering of Earth. Caused, seemingly, by an incorrect bit of data in the OpenStreetMap resulted in a 200-and-something storey skyscraper appearing in the Melbourne suburb instead of the modest 2-storey dwelling that exists there in the physical realm.

Similarly, the Sydney Harbour Bridge is…..not, and the Melbourne Cricket Ground is a literal panopticon. Though I am sure these will be rectified in an update. Australia, as ever, simply not high up the priority queue for getting the hand-crafted world updates that have already been released for Japan, the United States and Great Britain and Ireland.

I am not a pilot (I make websites, mainly), so it is hard to pass judgement on the flight model of the planes in Flight Simulator. The number of times I have been in something like the stock Cessna 172 amounts to, maybe, twice. And I certainly wasn’t flying (for the most part).

I also do not have a yoke and pedals or even a joystick. I’m flying this with an old Xbox controller. But for a casual player like me, this is working just fine.

It is very probable I am not getting that deep into the mechanics of actually flying a plane at all, but it feels close enough. There is throttle, pitch, roll, yaw as well as flaps for landing. Yes, they are not laid out in switches on my desk, but I am not looking for overt realism. I am looking for immersion.

And on that front, with some minor tweaking of the controls and assist settings, I think I have got there.

At the back of my mind, I know I am not doing even a fraction the work of a real pilot, but I don’t really care. I feel like I am and can – going back to the whole meditative aspect of laying Flight Simulator – lose myself in the experience.

Cruising through the world is smooth and in the Robin Cap 10 (a plane I have been enjoying quite a bit in recent weeks) execution of basic aerobatic moves is satisfying, even with what I am sure is a dizzying number of assists enabled.

What makes it different from most other simulation games is that there is really no pressure. No timetable. It’s not a race.

There are certainly those aspects available – the landing challenges are just that, especially for someone without a working knowledge of flight dynamics or systems. I am also wondering where the Red Bull Air Race mode is, because Flight Simulator seems made for something like that.

But ultimately what makes Flight Simulator so appealing is that it is one of the single most relaxing games I have ever come across. A real way to simply escape into serenity.