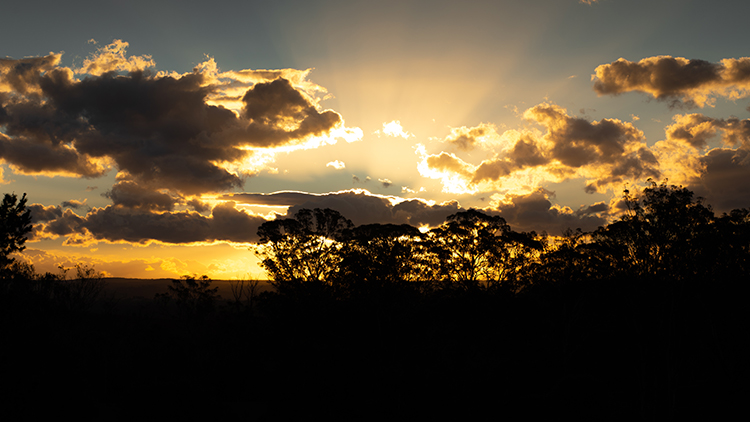 Sunsets in the city might be nice, but nothing beats the rich colours and intensity of a country sunset shining through the trees.

The family moved to the country in 2018. Specifically, we moved to Razorback, near Camden, just beyond the end of the awful suburban sprawl that is south-west Sydney.

One thing I didn’t count on, however, were the sunsets.

Yes, those urban shots of the sun setting behind a skyscraper or lining up perfectly with the middle of the road are nice to look at. But I tend the view we get out our back door is more impressive.

The farm sits, more or less, on top of a ridge.

It looks across the top of the gum trees and over the smaller ridge lines towards Lake Burragorang and the Warragamba Dam catchment.

On a clear day (of which there have not been too many recently) it can look like an oil painting.

Rich reds, yellows and purples dominate the sky as the sun slowly makes its way over the horizon.

The colours, of course, change depending the weather, time of year and all the things that generally effect how the outside world looks from day to day. But unless the thick cloud has set in blocking the sun completely, the visual is always impressive.

I think one of my projects over the course of this year will be to take more of these, ideally from different places around the local area to try and showcase just how picturesque this part of the world is.