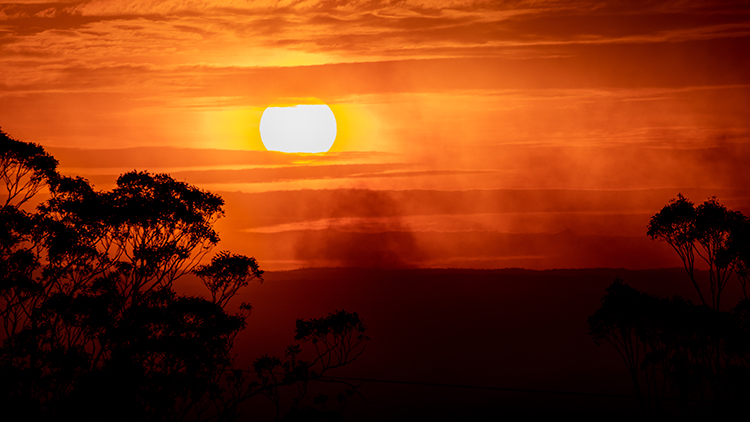 The last few months have been a relentless assault of fire, smoke-filled skies and unbreathable air. Here is a look at life in the smoke haze.

I am struggling to remember the last time I saw clear, blue sky. And when you move out of the city, out of the suburbs, and into the country, you tend to get used to having a completely flawless view of the sky.

More than once you would look across from the top of Razorback towards Camden and swear blind the sky was one of those matte backgrounds from a 1960s spaghetti western. There’s a point where the interplay between the sky and clouds is so vivid you start questioning how it can possibly be real.

But for the last…seemingly months now, the sky has been tainted by the dull browny-grey haze of bushfire smoke.

I feel as though it started before the Green Wattle Creek fire really took hold. Although the proximity of that fire to the farm we live on was the guarantee clean air would be a heavily restricted resource for a decent chunk of time.

It started burning around Lake Burragorang, about 20km from the farm we live on, towards the end of November and now stretches up into the Blue Mountains near Katoomba, west to Jenolan and south to Mittagong. According to the Rural Fire Service, it has burned through nearly 300,000 hectares of bushland.

The fire has also cost two volunteer firefighters their lives and destroyed a number of properties.

The extent and duration of the fire, its continual flaring up as a result of wind changes and arrival of hot air masses from the west of the country, has meant keeping a close eye on updates from the fire services and watching flight tracking websites constantly – monitoring the movements of water-bombing aircraft is a good way to check where the areas of concern are.

General levels of anxiety around has been high for a very long time.

Plans have been drawn up. Who will go, if the time for that decision comes? Will we stay and defend the house? What are the most precious things we have that need to be never be far from a suitcase? Is there always going to be a car in the driveway if someone is home?

Fire fighting pumps and hoses have been installed on the main water tank. There is a ladder to get on the roof fixed to the side of the house to made defending from embers easier. It is unnerving just thinking about what you might have to do.

The hardest thing, however, is the constant heartbreak of having to tell your three-year old daughter that she cannot play on her swing because simply going outside is going to make her sick. We have been under and effective quarantine for weeks.

Yes, you still go outside. You have to. But most times you do, the thickness of the smoke and the taste of ash is immediately overwhelming. You make those excursions has brief as possible.

The house is closed up. Even on the days it seems clearer, it isn’t. Open a window, even for an hour, and the fine film of particulate – what used to be trees and wildlife – covers everything.

There used to be a joke about transferring files using Microsoft Windows. “The time remaining changes by five minutes everything 30 seconds”.

You can say the same about the weather forecasts. Except the changes are becoming increasingly predictable. They predict rain in a week. After a few days the rain is reduced to showers. By the time the day rolls around the showers have been reduced to nothing.

Oh, and the temperature has risen by 10 degrees.

Relief will be expected in the form of Eastern Australia’s greatest summer saviour: the southerly change.

But a southerly buster that is good news for your levels of comfort is bad news for those near some of the fires. For them, a gusty wind change brings danger, not comfort.

At times it feels as though the cycle is perpetual, ceaseless. The onslaught is depressing.

April, maybe, or May the drought should break. Still at least four months away. An entire half-year we will have been shrouded in smoke, living on edge in fear of the next fire front. It is impossible to focus on anything else.

Even if it does rain, it will not be long before we are once again reading the most chilling phrase there is: it is too late to leave.

PrevPreviousI Won’t Be Using the Digital Driver’s Licence, Nor Should You
NextFarm AnimalsNext