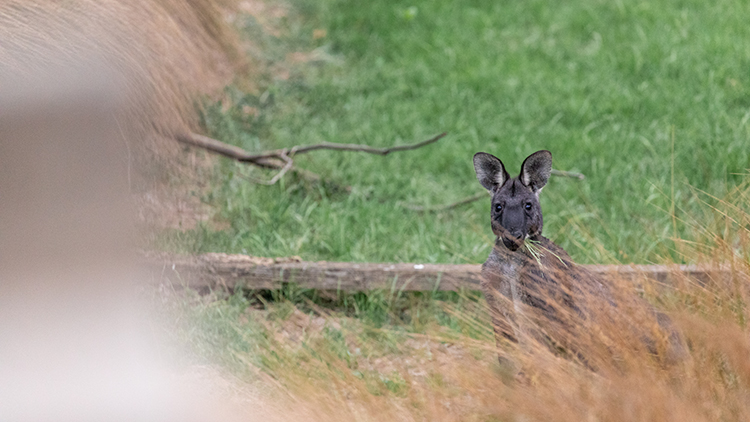 With food harder and harder to find in the bush, the local wildlife is venturing wider and wider looking for their next meal.

It is bittersweet, really.

We know that wildlife is struggling. First it was the drought, now the fact the places it calls home have been burning for…a long time.

As food has become hard to come by, everything is being forced to cast a wider net.

And as that has happened, it means the farm has become a pretty great place to spot assorted Australian fauna, mostly of the avian variety.

It started with the cockatoos, although my father-in-law encouraged them with biscuits in the early days before realising that probably wasn’t such a crash hot idea the afternoon a dozen or more turned up looking for their milk arrowroot.

We still occasionally can walk outside and expect Alfred Hitchcock to yell at you to get out of his shot.

More recently, the visitors have been more colourful. And more numerous.

Today, we got a kangaroo.

We had kangaroos before. There was a period last year when the same two would turn up in the same spot at the same time of day for weeks at a time.

Just noticing they were there was enough to send them scurrying back into the scrub that butted up against the fence of next door.

Today’s kangaroo looked tired. He looked done, that he had spent enough time fighting just to survive. I was surprised how close he let me get.

He found some green grass and was not going to let me get in the way of his tucking in.

I am not sure how great it would have tasted. The reason we even have green grass is that’s the spot where the effluent from the septic tank is sprayed out.

He then moved down to the dam for a drink. What he found was disappointment.

The dam was healthy when we moved to the farm in 2018. I used to joke about getting a small tinny for it so we could paddle across to the island and see what birds had set up shop there away from the foxes.

It is not even a dam anymore. It is a ditch. The water is long since gone and I am doubtful it will ever return. The amount of rain we would need is increasingly unlikely to be seen.

There was some more grass though. A small saving grace of being the last place to lose moisture is that it supported growth after the everything else shrivelled up and died.

It was there I left him be and wished him well.

We suspect he will be back now he knows that spot is there.

In his spare time he has bad thoughts. Thought Crimes is their home.

Why is Flight Simulator so much fun?

News is not going to get better

How my Bliss Body dreams died

What is a Re-certification Inspection?

Guesting on The Balls Podcast