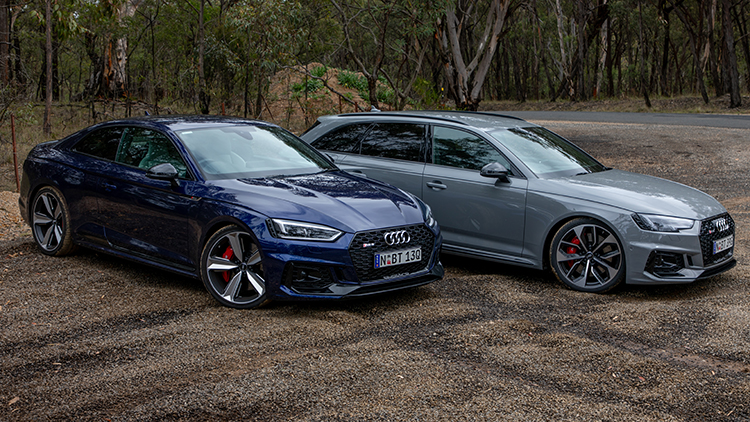 Coupe or wagon? It’s a question that in all likelihood not too many people have ever posed to themselves. But that’s exactly the one The Redline sought to answer one morning in the Blue Mountains.

See all the photos on The Redline

Photo days out with The Redline are rarely boring. This particular day was definitely not boring.

The grey car is the Audi RS4 Avant. Avant means wagon, apparently. Popular car website CarThrottle suggests it could be a French, in which case it translates into English as “before”, meaning the car is somehow ahead of its time.

In that case, the RS4 Avant is easily the class leader in the Cars With Horrifically Laboured Metaphors for A Name Stakes. Not sure how any of that stacks up for something made in what what you could argue is the middle of Germany. Stereotypes and all that.

The blue car is the Audi RS5. The RS5 is a coupe, although that fact is not appended onto the offical model name.

In spite of what your eyes are telling you, these cars are identical.

They are built on the same platform, they have the same twin-turbocharged V6 engine, same billion-speed automatic gearbox, same everything.

The differences are that the RS4 Avant is a grey-coloured wagon (other colours are available at, being an Audi, additional cost) while the RS5 is blue-coloured coupe (ditto).

Both cars are distinctly Audi. They follow that great trend of looking exactly like every other Audi except for the bits where the shape must be modified to suit the fact it has fewer doors (RS5) or requires additional boot space (RS4 Avant).

Inside, at least as far as the driver is concerned, they are identical. So identical that I didn’t bother taking photos of both dashboards and centre console layouts. There was not point. If I’d lied and just used the same photo twice, you would not know.

This was also the shoot I spent a significant amount of time safely* harassed* into the back of the videographer’s Nissan Patrol so I could sit in the boot and shoot tracking photos of both cars on the road. That was fun, if exceptionally uncomfortable.

You can check out a selection of images from the day in the gallery below.

As ever, you can (and should) read the full review on The Redline because Peter is a proper motoring journalist with proper opinions. Some of which you might even agree with.

It also helps me. Because that is important too.